Developed through the New Ideas Festival at Alumnae Theatre, a Toronto women’s theatre company, Radical tells the story of a forgotten Canadian hero, Dr. Vera Peters, and her fight with surgeons to abandon the radical mastectomy.

First presented at the Toronto Fringe Festival, 2014, the play was one of Mooney on Theatre’s Recommended Shows.

CBC Radio’s The Sunday Edition presented a documentary on the play and its background by Karin Wells.

Radical was remounted in the fall of 2015 in the Fireworks Festival at Alumnae Theatre, and has also received readings in Peterborough (ON), Edmonton, and St. John’s.

The playscript for Radical is available from the Canadian Play Outlet.

“I found myself quite moved by the final scenes. The emotion blindsided me…Isn’t that a hallmark of really great storytelling?…this is a play you should see. Why? Because it’s a good story, well told. Because it’s a piece of Canadian history you may not know, but should. Because it’s good theatre.”

“Seeing “Radical” was a great experience in the theatre. A proud moment of Canadian medical history is brought to life in a compelling drama. We laughed more than we thought possible given the subject and yes there were tears. This play is beautifully crafted with fine performances to match. Bravo to all involved!

“Brilliantly captured the life of Dr. Vera Peters, courageous role model for so many of us.””

Developed and produced by 4th Line Theatre, Millbrook, ON, Eldorado Town tells the story of radium and uranium refining in Port Hope, ON, through the viewpoints of Marcel Pochon, a French chemist brought to Canada to refine radium, and Cam McGinnis, a factory employee.

“Interesting story, clever songs, an enthusiastic cast, and a pleasant outdoor setting – definitely worth the outing.”

“Lifts the veil of fear of radiation that has plagued Port Hope for years.”

My article about the challenges of developing and writing Eldorado Town, “Navigating Nuclear Hazards: The Writing of Eldorado Town for 4th Lone Theatre,” appeared in the journal alt.theatre: cultural diversity and the stage, Vol. 8, No 4, June 2011. 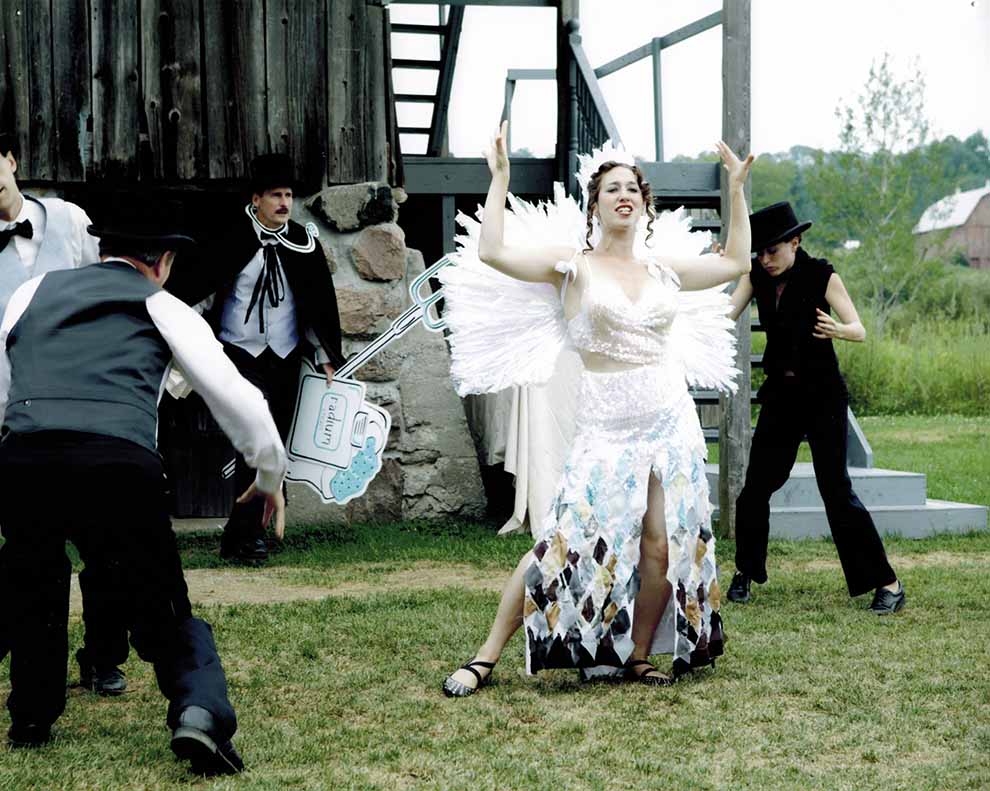 Leora Morris appears as Radium in the opening musical number, “Radium, Queen of the Elements,” with Scott Maudlsey as Dr. Pochon in the background. Photo: Wayne Eardley

My one-person show about a doctor with a secret life as a drag queen and his struggle to keep these worlds from colliding.

Lady-in-Waiting was first produced at the Montreal International LGBTQ Theatre Festival, and was remounted at the Fresh Fruit Festival in New York City, where it received the award for Best Writing: One Person Show.

The playscript for Lady-in-Waiting is available from the Canadian Play Outlet.

“An often humorous and consistently moving response to one man’s desire to support his respective communities in a holistic, loving, and sincere manner.”